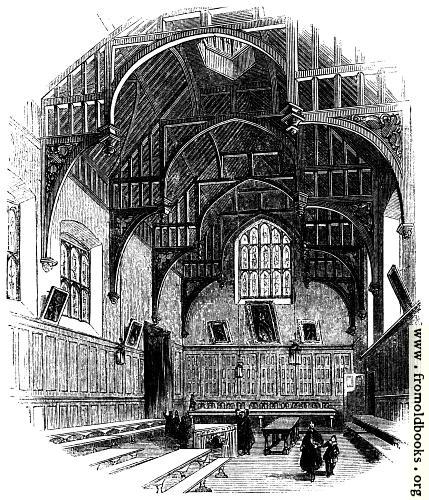 Gray’s Inn Hall (Fig. 1731) is superior to that of Lincoln’s Inn or the Inner temple, and little inferior to the Middle Temple Hall. Its chief architectural attractions are its timber roof, carved wainscot, and emblazoned windows. It was completed in 1560. Some of the revels of the “practisers” of Gray’s Inn seem to have drawn upon them evil report, especially on the “ferial” days. An order of the reign of Henvy VIII., forbidding the fellows to depart out of the Hall during revels, until they are ended, under penalty of 12d., seems to indicate pretty plainly the nature of some of their laxities—the students would be masquerading in the streets, as well as in the Hall. (p. 118)