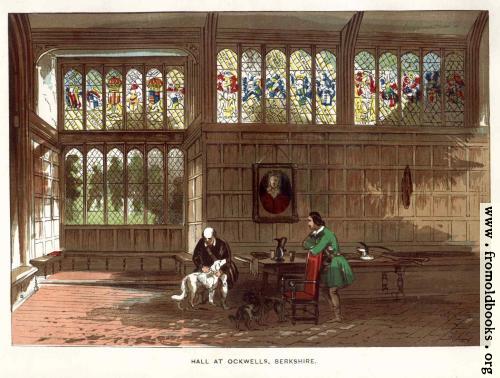 Coloured in the original book.

“The old manor-house of Ockwells is situated about one mile westward from bray, in Berkshire. It is one of those mansions built chiefly of timber framework, of which many yet remain in England, some of them almost as large as palaces and little less magnificent, picturesque without, with their bay windows and ornamented gables, and righ in timber-roofs, oak panneling, and carved furniture, within. Sixty or seventy years ago [as of 1845] a large part of Ockwells manor-house was burnt down. Of the part which remains, now converted into a farm-house, the gables are striking and richly carved. The panneling of the hall and the fine oriel window divided by mullions into six lights yet remain, but the timber roof has been covered up and formed into a flat ceiling. The upper windows are still filled with the original painted glass. The mansion was built by John Norreys, lord of the manor of Ockholt in the parish of Bray, who in 1465 left a considerable sum by will for the completion of the building. The paintings in the windows consist of coats of arms of the Norreys family, and those of Henry VI., Margaret of Anjou, the abbot of Westminster, Beaufort duke of Somerset, Edmund last earl of March, Henry duke of Warwick, De la Pole duke of Suffolk, and other noble and distinguished persons.” [vol II p. iv]