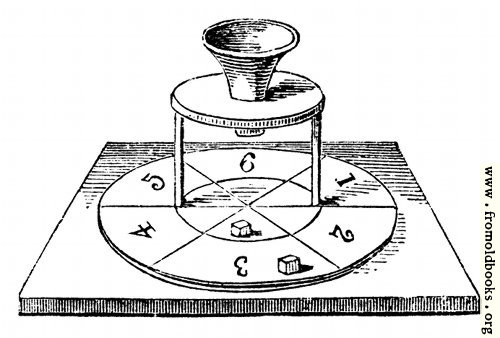 The government of Edward IV.—a thing of force—grows alarmed at the idea of any decrease of the materials of force, and so the popular sports are condemned, and the instruments used in them are to be destroyed;—dice (Fig. 1389) among the rest; and shooting-butts (Fig. 1375) are to be erected in every township. But he edict fails; the use of the bow still declines; and the government, as it ceases to find the materials for its armies always ready among its subjects generally, leans more and more towards a chosen portion of them—the growing hired and standing army of England. (p. 384)

The wood-engrving shows a sort of funnel arranged over a board maarked out with numbered areas from one to six: a small object thrown into the funnel will come to rest in an unpredictable area, thus making a number.