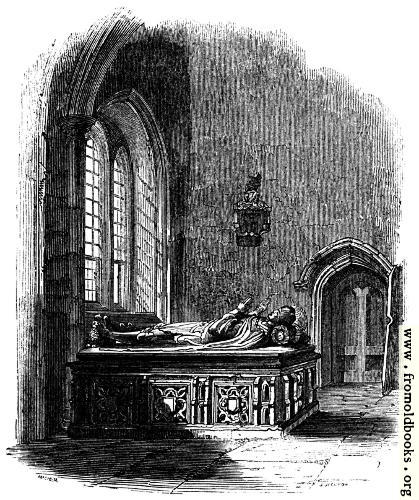 A tomb lies in a quiet corner of a church, partly in deep shadow.

[...] This is the church of St. Helen’s in Bishopsgate (Fig. 1285), formerly the remains of a priory of Benedictine nuns, whose long row of carved seats against the wall yet exist in the structure. As the burial-place of Sir Thomas Gresham St. Helen’s is most popularly known. That truly illustrious merchant lies in the corner shown in our engraving; his arms are emblazoned in the window above. But the monument that more especially attracts us at the present time is that of Sir John Crosby and his lady, with their effigies, a truly beautiful piece of sculpture. (Fig. 1275.) Sir John, the founder of Crosby Hall, was an alderman of London, and the holder of various other important offices—a fact that no doubt made his accession to the friends of Edward IV. a matter of importance: by Edward he was knighted during the adventurous march from Ravenspur to London. (p. 374)