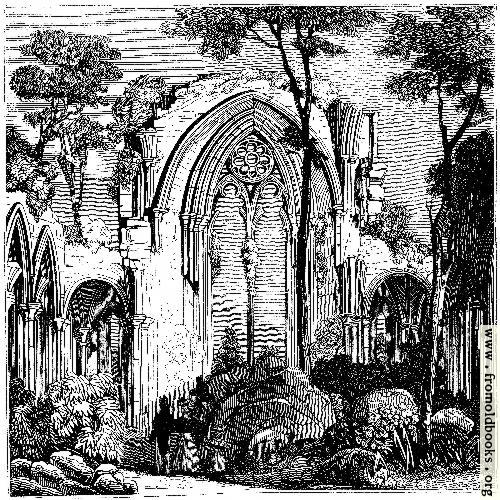 There is another more recent picture of Netley Abbey; see the Netley Location link.

To the desecrators of the fine old relics of England we commend the story told of a builder of Southampton, in connection with Netley Abbey (Fig. 1027). Soon after the beginning of the last century [i.e. 1700—Liam], Mr. Walter Taylor purchased this abbey, intending to pull the whole fabric to pieces, and with the materials erect a town-house at Newport, and dwelling-houses at other places. After the contract had been made, some of Mr. Taylor’s friends appear to have been conversing with him on the unworthiness of it, and uttered the forcible remark, that “they would never be concerned in the demolition of holy and consecrated places.” Mr. Taylor then began to feel less satisfied with his undertaking; and his family have since stated that he related to the father of Dr. Isaac Watts a dream that he had, in which, whilst taking down the abbey, the keystone of the arch over the east window fell from its place, and killed him. Dreams were held in more respect a century ago than they are at present [1845]; but Mr. Watts’ advice went no further than recommending that the builder should not personally be concerned in the destruction of the abbey. His advice, such as it was, was not followed. Mr. Taylor superintended the operations of his workmen at their melancholy task; and, singularly enough, while he was removing some boards within the east window, to admit air, a stone fell upon his head and fractured his skull. The injury was not at first deemed mortal; but the decree had gone forth—the spoiler of the holy edifice was doomed—he died under the operation of extracting a splinter. It might certainly be said that the accident of the surgeon’s instrument slipping aside and piercing the brain was the immediate cause of death, and not the stone; but we can think only of the moral bearing of the incident, nor will a little superstition on this point be amiss, if it induce certain people to lay more reverent hands on time-honoured remains like Netley Abbey.” (p. 291)