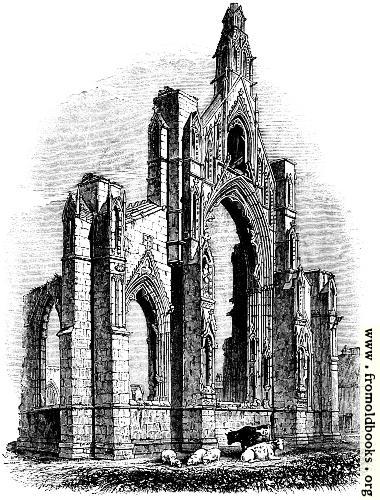 The perfect Romantic Ruin, an abbey that was once a place of worship and a seat of power, and has now fallen so low that cattle graze where there was once a High Altar.

A poem written by William Wordsworth in 1837, less than ten years before this engraving was published, is called to mind:

Ye trees! whose slender roots entwine
Altars that piety neglects;
Whose infant arms enclasp the shrine
Which no devotion now respects;
If not a straggler from the herd
Here ruminate, nor shrouded bird,
Chanting her low-voiced hymn, take pride
In aught that ye would grace or hide—
How sadly is your love misplaced,
Fair Trees, your bounty run to waste!

Ye, too, wild Flowers! that no one heeds,
And ye—full often spurned as weeds—
In beauty clothed, or breathing sweetness
From fractured arch and mouldering wall—
Do but more touchingly recall
Man’s headstrong violence and Time’s fleetness,
Making the precincts ye adorn
Appear to sight still more forlorn.

(William Wordsworth, Among the Ruins of a Convent in the Apennines, from Memorials of a Tour in Italy, No. 23)

The book (Old England, I mean) also has some notes on Howden Church:

“Never, probably, has there been a time of greater misery or humiliation for England than during the sovereignty of Ethelred the Unready, when the kingdom was about to pass from the family of the glorious Alfred to the Northern Pirates, by whom it had been so long harassed. Ethelred inherited no spark of the genius of his ancestor; and that dreaded consummation he made no decisive effort to avert, except by bribing the adventurers of the “Raven’s” standard with his subjects’ gold. To get this, he insituted the regular tax of the Dane-Geld, or Gold for the Danes, which he levied with such cruel rigour that he grew as odius to his people as even the terrible Northmen. The religious houses, having settled endowments, were a ready prey; and the monatery of Peterborough is recorded as one of those which, having failed to pay its Dane-geld, suffered loss of land estate. Thus it was that the manor and collegiate establishment of St. Peter at Howden (or Hoveden) passed from the Peterborough monks to the crown.

We know scarecely anything of its after history, except that it was dissolved by Edward VI., and that, excepting a portion which is now [1845] the parish church, all was left to decay. And yet the place has been a considerable one, for the ruins (Fig. 1025) are extensive and of beautiful Gothic rchitecture. The Chapter-house is one continuous specimen of rich and delicate ornament in stone. Here are thirty seats with ribbed canopies and carved rose-work, seven windows full of light and elegant tracery, and niches for statues garnished with tabernacle-work. Some antiquarians go so far as to say that this, though small, is the most beautiful chapter-house in England.

There is a high and shapely tower overtopping the ruiins of Howden Church, that was built by Walter Skirlaw, Bishop of Durham, about the end of the fourteenth century, at the same time with part of the church, and the palace of the Durham bishops, also a ruin. The Book of Durham, quoted by Camden, gives Howden tower an origin similar to the tower of Babel, on the plain of Shinar—that is to say, it was to save the people of this district in the event of the rivers Ouse and Derwent flooding the land. the population must have been very scanty, judging by the accommodation provided for them in the interior of this tower. With all deference to Camden, however, the story is not deserving of credit.” (pp. 200, 201)

Note that King Ethelread was called Unrede, meaning ill advised, and not Unready; the text quoted should be treated as one man’s opinion from 1845.