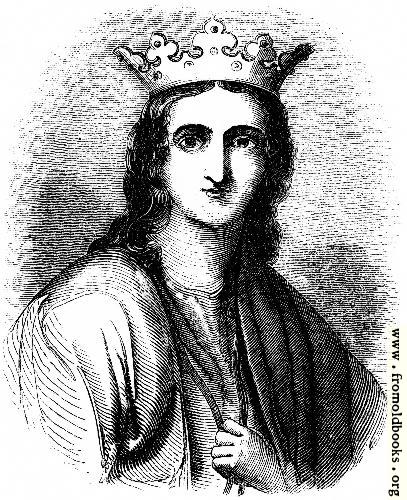 If it be true, as one of our poets remarks, that (we quote from memory)

“It is the heart which glorifies this life,”

then was there a glory shining about that of the king of Castile’s daughter, Edward’s wife Eleanor (Fig. 824), who with lips, as an old writer quaintly observes, “announted with the virtue of lovely affection,” drew the poison from the wound which her husband had reeived at Acre,in palestine, from Azazim, a Saracen, of the murderous sect of Assassini: hence our word “assassin.” Eleanor gained an immortal memory by this extraordinary example of conjugal affection; but that she did it not for fame, but love, is touchingly evident in the feelings of grief, admiration, and gratitude with which Edward cherished her memory after hear death in 1291. She was married to him at Bures in Spain, crowned with him the day of his coronation, lived his wife, “in lovely participation of all his troubles and long voyages” thirty-six years, and died either at Grantham, or at Hardeby, near Grantham in Lincolnshire, as Edward was on his way to Scotland, when he first began to insinuate himself into the affairs of that kingdom. But Edward’s passion for ruling and oppressing the Scots succumbed now to a holier feeling. His journey was stopped, he gave all thoughts to his faithful and devoted partner’s remains, which were emblamed, and the internal prts laid in Lincoln Cathedral, the body itself being conveyed to Westminster. A long and melancholy journey the mourning king made with it to the chapel of King Edward the Confessor; and the nation, to whom Eleanor had been a “loving mother,” sincerely sympathized in grief. The mournful procession rested in its progress at Lincoln, Stamford, Dunstable, St. Albans, and Charing, then a village, and some other places, about fifteen in all, at every one of which, when the beloved and noble-eharted woman had passed from mortal view, Edward, to perpetuate the memory of her virtues and his love, erected a beautiful Gothic building in the form denominated a cross. (A view of the Charing Cross is given in Fig. 826.) (p. 226)