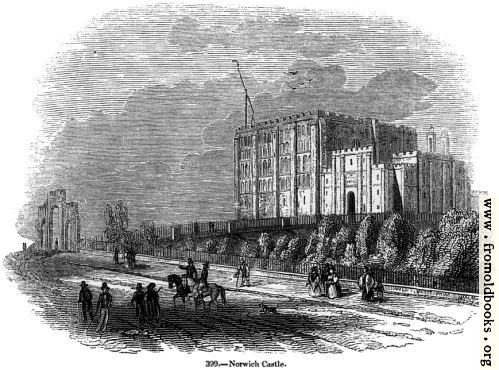 “[...] Hugh Bigod, who had sworn that Henry had appointed Stephen his successor, was the first to hold out against the king in the Castle of Norwich, which his ancestor had built. Norwich was a regular fortress, with a wall and ditch, an outer, a middle, and an inner court, and a keep. The bridge over one of the ditches and the keep still remain. The keep had long since gone through the customary process of being turned into a jail, and the jail being removed it is now gutted and roofless. This keep is a parallelogram, a hundred and ten feet in length by about ninety-three in breadth. The walls are in some places thirteen feet thick, and the tower is seventy feet in height. It was not sufficient for the people in authority in the last century to tear this fine historical monument to pieces, by their fittings up and their pullings down, but they have stuck on their county gaol at one end—a miserable modern thing called Gothic—paltry in its dimensions, and incongruous in its style.” [Vol I, p. 102]