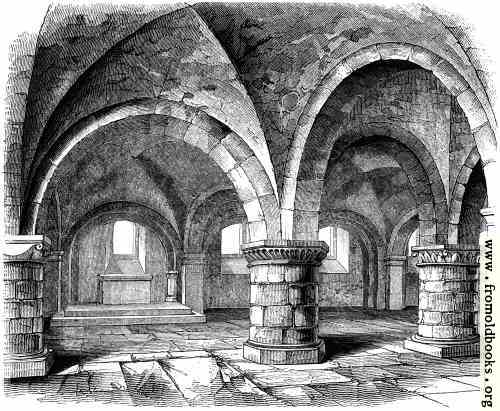 “Under its original name of the Isle of Bramble or thorn-ea, Westminster was a place of importance before London existed.

“The Saxon king Sebert (597 – 616) built a monastery on the site now occupied by the abbey. Offa (700) is said to have had a ‘king’s house’ there. King Canute the Dane (1017 – 35) began the building of what became the palace of Westminster, in which the sovereigns of England held their court for five hundred years, and Edward the Confessor (1042-66) rebuilt Serbert’s monastery on a scale of great magnificence. This new house he called West Minster, by which name both the abbey and Thorn-ea have since been designated.

“Henry III. (1216 – 72) pulled the minster down, and, for the purpose of doing honour to the Confessor’s memory, began the erection of a more splendid building, which was completed by Edward I. (1272 – 1307) and succeeding sovereigns.

“The abbey, indeed, as it has come down to us, represents the work of something like five hundred years. But while the glorious West Minster has been preserved, all that now remains of the palace begun by Canute is the beautiful hall built by William Rufus (1097), in which Charles I. was tried and condemned, and the crypt. [shown here]”. (Harmsworth Encyclopædia, approx. 1907, p. 6274)