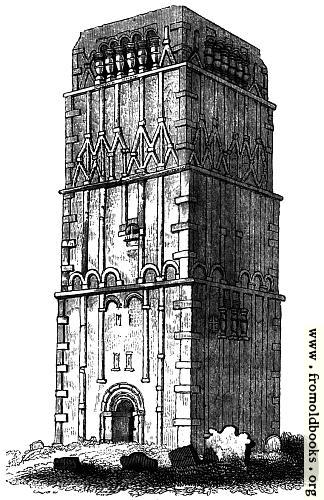 The church in Earl’s Barton, in Northamptonshire, is a work of several periods of our Gothic architecture; but the tower is now universally admitted to be of Saxon construction (Fig. 209). It exhibits many of the peculiarities recognised as the characteristics of this architecture. 1st, We have the “long stone set at the corner, and a short one lying on it”—the long and short work, as it is commonly called (Fig. 201). These early churches and towers sometimes exhibit, inlater portions, the more regular quoined work in remarkable contrast (Fig. 200). 2nd, the tower of Earl’s Barton presents the “sort of rude balustre, such as might be supposed to be copied by a very rough workman by remembrance of a Roman balustre” (Fig. 202). 3rd, It shows the form of the triangular arch, which, as well as the balustre, are to be seen in Anglo-Saxon manuscripts. 4th, It exhibits, “projecting a few inches from the surface of the wall, and running up vertically, narrow ribs, or square-edged strips of stone, bearing, from their position, a rude similarity to pilasters.” (Bloxam’s ‘Gothic Ecclesiastical Architecture.’)

The writer of the valuable manual we have quoted adds, “the towers of the churches of Earl’s Barton and Barnack, Northamptonshire, and of one of the churches of Barton-upon-Humber, Lincolnshire, are so covered with these narrow projecting strips of stonework, that the surface of the wall appears divided into rudely formed panels.” 5th, The West doorway of this tower of Earl’s Barton, as well as the doorway of Barnack, exhibit something like “a rude imitation of Roman mouldings in the impost and architrave.” The larger openings, such as doorways, of these early churches generally present the semicircular arch; but the smaller, such as windows, often exhibit the triangular arch (Figs. 203, 205).” (p. 62)

Dave Postles has a modern photograph.

The tower is 24 feet on a side [approx. 7.5 meters] on the outside and 16 feet [a little under 5 metres] on a side on the inside, so the walls are about four feet thick near the base The top storey of the tower is probably a more recent addition.

I apologise that the bottom right corner of this image was lost in the fold of the book, where there was a crease.