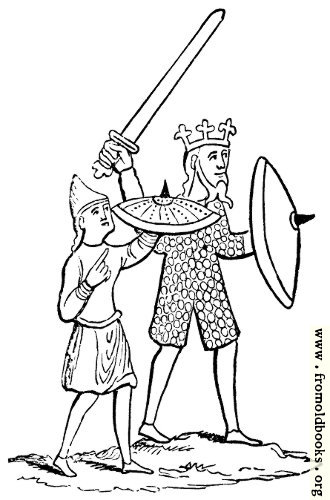 An illustration of a Biblical scene but with Anglo-Saxon costumes and weapons. A king (with a long forked breard) wears a crown, brandishes a heavy sword and carries a shield; he wears ring-mail. Next to him a boy (probably) holds up a second shield.

Cotton Manuscript Claudius B. iv. is now called the “Old English Hexateuch” and is a translation into Old English (Anglo-Saxon) of the first six books of what Christians refer to as the Old Testament: Genesis, Exodus, Leviticus, Numbers, Deuteronomy and Joshua. It’s from roughly A.D. 1230. Some of the pages of this manuscript are online at the British Library; search for Cotton Claudius B iv on their images online page.