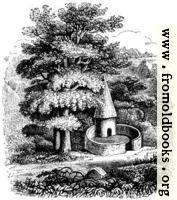 Of the domestic buildings of the early Britons there are no remains, if we except some circular stone foundations, which may have been those of houses. It is concluded, perhaps somewhat too hastily, that their houses were little better than the huts of the rude tribes of Africa or Asia in our own day (Fig. 49). In the neighbourhood of Llandaff were, in King’s time, several modern pig-sties, of a peculiar construction; and he held that the form of these was derived from the dwellings of the ancient Britons. (Fig. 55.) This form certainly agrees with the description which Strabo gives of the houses of the Gauls, which he says were constructed of poles and wattled work, of a circular form, and with a lofty tapering roof.” (p. 11)