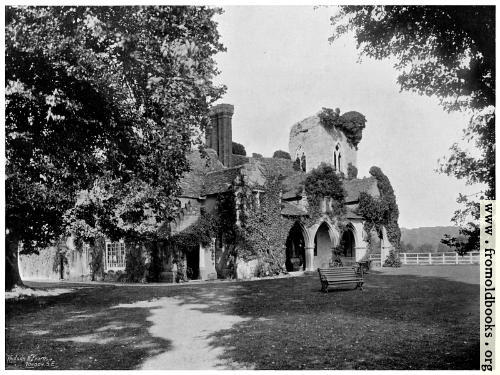 Leyland, John: “The Thames Illustrated: A Picturesque Journey from Richmond to Oxford” (1897)

Medmenham is among the prettiest places on the Thames, and the Abbey, bogus structure though it really is, makes a picturesque feature upon the bank. Here was a Cistercian House colonised, the second time in 1212, by monks from Citeaux, [...]. In the beginning of the 16th century, Medmenham Abbey became an appanage of Bisham [...].

Its monks lived the quiet life of the cloister, and it was reserved for the sham monks of the last century, the “Franciscans” of Sir Francis Dashwood and his profligate companions, to awake the echoes with the sounds of their unholy revelry, there devoting themselves, if their contemporaries speak truth, to nameless debauchery. (p. 147)

The book is referring to the fact that Medmenham Abbey, in the 1750s, was a home of the Hellfire Club. The abbey was remodeled for the purpose in the gothic revival style, which may be what Leyland, writing this book, meant by the structure being “bogus.”