Frontispiece: The King and Queen inspecting the tarts


The plate of tarts is presented for the approval of the King and Queen of Hearts in their throne-room. [$]


“There was nothing so very remarkable in that; nor did Alice think it so very much out of the way to hear the Rabbit say to itself, ‘Oh dear! Oh dear! I shall be late!’ (when she thought it over afterwards, it occurred to her that she ought to have wondered at this, but at the time it all [...]took a watch out of its waistcoat-pocket, and looked at it, and then hurried on, Alice started to her feet, for it flashed across her mind that she had never before seen a rabbit with either a waistcoat-pocket, or a watch to take out of it, and burning with curiosity, she ran across the field after it, and fortunately was just in time to see it pop down a large rabbit-hole under the hedge.” [more...] [$] 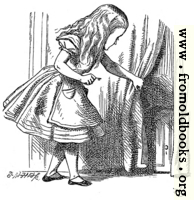 Alice Looking for the Door


“Suddenly she came upon a little three-legged table, all made of solid glass; there was nothing on it except a tiny golden key, and Alice’s first thought was that it might belong to one of the doors of the hall; but, alas! either the locks were too large, or the key was too small, but at any rate it would not open any of them. However, on the [...] [more...] [$]


“ ‘Curiouser and curiouser!’ cried Alice (she was so much surprised, that for the moment she quite forgot how to speak good English); ‘now I’m opening out like the largest telescope that ever was! Good-bye, feet!’ (for when she looked down at her feet, they seemed to be almost out of sight, they were getting so far off). [...]I shan’t be able! I shall be a great deal too far off to trouble myself about you: you must manage the best way you can; —but I must be kind to them,’ thought Alice, ‘or perhaps they won’t walk the way I want to go! Let me see: I’ll give them a new pair of boots every Christmas.’ ” [more...] [$] 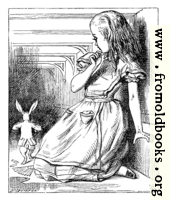 
“Just then her head struck against the roof of the hall: in fact she was now more than nine feet high, and she at once took up the little golden key and hurried off to the garden door. [more...] [$] 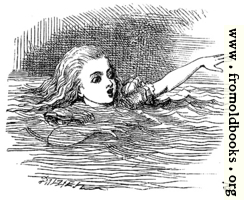 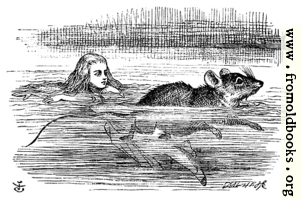 Alice swimming near a mouse


“Just then she heard something splashing about in the pool a little way off, and she swam nearer to make out what it was: at first she thought it must be a walrus or hippopotamus, but then she remembered how small she was now, and she soon made out that it [...] [more...] [$] 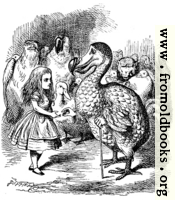 Alice and the Dodo


“Then they all crowded round her once more, while the Dodo solemnly presented the thimble, saying ‘We beg your acceptance of this elegant thimble’; and, when it [...] [more...] [$] 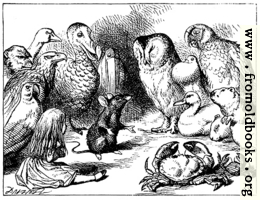 The mouse tells Alice a story 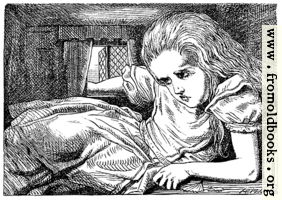 
“[...] before she had drunk half the bottle, she found her head pressing against the ceiling, and had to stoop to save her neck from being broken. She hastily put down the bottle, saying to herself ‘That’s quite enough—I hope I shan’t grow any more—As it is, I can’t get out at the door—I [...] [more...] [$]