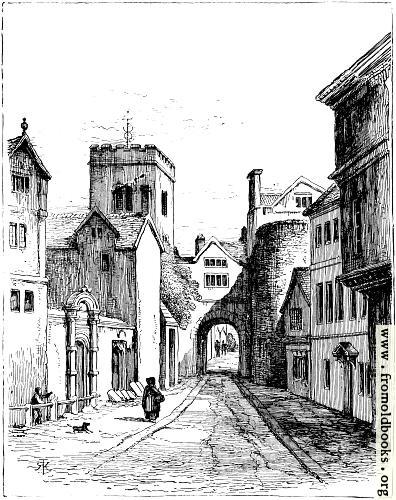 The Bocardo, the mediaeval prison in Oxford, shown from the North side; the engraving is signed “S. R.”

Of Bocardo no trace remains, but St. Michael’s is likely to last as long as any edifice in Oxford. Our illustrations represent it as it was in the last century. The houses huddle up to the church, and hide the lines of the tower. Now it stands out clear, less picturesque than it was in the time of Bocardo prison. Within the last two years the windows have been cleared, and the curious and most archaic pillars, shaped like balustrades, may be examined. It is worth while to climb the tower and remember the times when arrows were sent like hail from the narrow windows on the foes who approached Oxford from the north, while prayers for their confusion were read in the church below.” (p. 35)