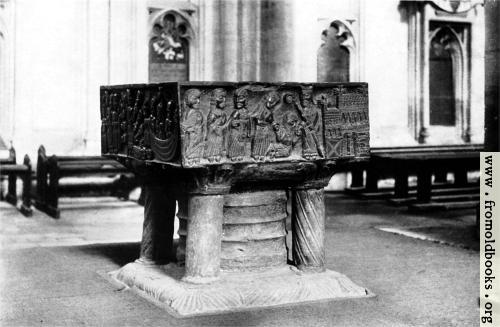 Note to searchers: this is a baptismal font made of stone.

(From a Photograph by H. W. Salmon)

“A feature more specially characteristic [of the county of Hampshire] is to be found in the remarkable series of black fonts. There are four of these—in [Winchester] Cathedral, and at St. Mary Bourne, East Meon, and in St. Michael’s, Southampton, while there are only three others in all England—at Lincoln Minster, Thornton Curtis, Lincolnshire, and St. Peter’s, Ipswich. There are also a few instances in churches in Belgium and France, and one from a French church is in the MuséeCluny at Paris. From the extreme rudeness [i.e. poor execution] of the carving of figures, due not so much to the date as to the intractable hardness of the material, they used formerly to be supposed to be very early, and all the old guide-books call them “Saxon.’

The first real inquiry into them was made by Dean Kitchin [note 1], who established the facts that the peculiar black limestone of which they are made is Belgian, from quarries in the neighbourhood of Tournai, on the banks of the Scheldt, and that the legends of St. Nicholas did not become current till the middle of the twelfth century. These fonts, therefore, [note 2] belong to the episcopate either of Henry of Blois (1129 – 1171) or Richard Toclive (1174 – 1188).

the one in the Cathedral [pictured here] is the most interesting, from its quaint representations of the Nicholas legends—saving a nobleman’s only son from drowning, portioning a poor noble’s three daughters, and reviving three murdered boys out of an innkeeper’s sausage tub. It is from this last story that St. Nicholas, under the curious corruption of “Santa Claus,” has become the patron saint of children. The font at East Meon has scenes from the beginning of Genesis—the Creation, the Fall, and the Expulsion from Paradise. St. Mary Bourne font, the largest of the series, has only clusters of grapes and two doves drinking. The one in St. Michael’s has three of the Evangelistic symbols and some fearsome griffins. There are also black fonts at Meon Stoke (painted over), Leckford, Stockbridge, and Warnford. A fine late Norman fontof a different kind is at Portchester, but only the upper part is ancient.” (pp. 123,4)

Note 1: A reference to footnote 1 here in the book: Journal of british Archœological Association, I. i. The Hampshire ones are fully decribed and illustrated by Mr. Romilly Allen in Victoria County History, vol ii.

Note 2: This seems to me (Liam) pretty poor logic. Just because the story of St. Nicholas became common in the 12th century doesn’t mean it could not have been told earlier.

I found a reference to H. W. Salmon having a photograph used by the Illustrated London News in 1889; in Hampshire in 1900, by which time there was a firm of photographers, H. W. Salomon & Sons in Winchester but I have no further information.