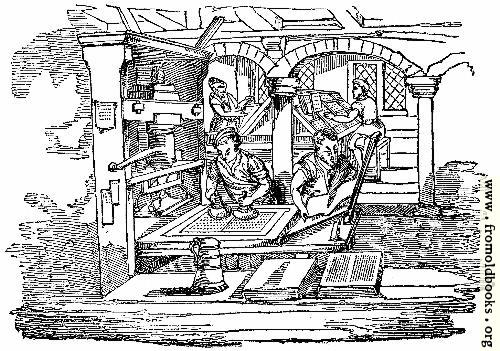 “An exact old writer says of printers at this season of the year [August 25th], that “It is customary for all journeymen to make every year, new paper windows about Bartholomew-tide, at which time the master printer makes them a feast called a way-goose, to which is invited the corrector, founder, smith, ink-maker &c. who all open their purses and give to the workmen to spend in the tavern or ale-house after the feast. From which time they begin to work by candle-light.”

Paper windows are no more [1826]; a well regulated printing-office is as well glazed and as light as a dwelling-house. It is curious however to note, that it appears the windows of an office were formerly papered; probably in the same way that we see them in some carpenters’ workshops with oiled paper. The way-goose, however, is still maintained, and these feasts of London printing-houses are usually held at some tavern in the environs.

In “The Doome warning all men to the judgement, by Stephen Batman, 1581,” a black letter quarto volume, it is set down among “the strange prodigies happening in the worlde, with divers figures of revelations tending to mannes stayed conversion towardes God,” whereof the work is composed, that in 1450, “The noble science of printing was aboute thys time founde in Germany at Magunce, (a famous citie in Germanie called Ments,) by Cuthembergers, a knight, or rather John Faustus, as sayeth doctor Cooper, in his Chronicle; one Conradus, an Almaine broughte it to Rome, William Caxton of London, mercer, broughte it into England, about 1471; in Henrie the sixth, the seaven and thirtieth of his raign, in Westminster was the first printing.”

John Guttemberg, sen. is affirmed to have produced the first printed book, in 1442, although John Guttemberg, junior. is the commonly reputed inventor of the art. John Faust, or Fust, was its promoter, and Peter Schoeffer its improver. It started to perfection almost with its invention; yet, although the labours of the old printer have never been outrivalled, their presses have; for the information and amusement of some readers, a sketch is subjoined of one from a wood-cut in Batman’s book.

In this old print we see the compositor seated at his work, the reader engaged with his copy or proof, and the pressmen at their labours. It exhibits the form of the early press better, prehaps, than any other engraving that has been produced for that purpose; and it is to be noted, as a “custom of the chapel,” that papers are stuck on it, as we still see practised by modern pressmen [1826]. Note, too, the ample flagon, a vessel doubtless in use ad libitum, by that beer-drinking people with whom printing originated, and therefore not forgotten in their printing-houses; it is wisely restricted here, by the interest of employers, and the growing sense pf propriety in press-men, who are becoming as respectable and intelligent a class of “operatives” as they were, within recollection, degraded and sottish.” (pp. 1133 – 1135)