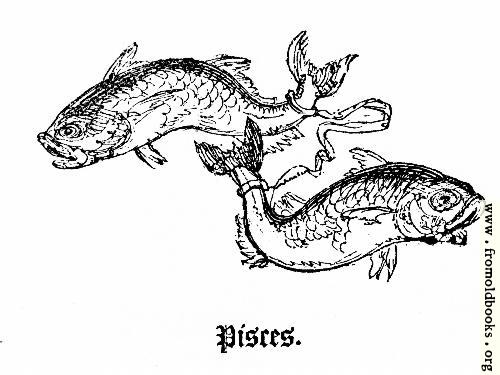 The zodiacal sign of pisces, two fish, here with a ribbon or rope bound from the tail of one to that of the other.

This zodiacal sign is said to symbolize the fishery of the Nile, which usually commenced at this season of the year. According to an ancient fable, it represents Venus and cupid, who, to avoid Typhon, a dreadful giant with a hundred heads, transformed themselves into fish.

The idol Dagon, with a human head and arms, and a fish’s tail, is affirmed to be the symbol of the sun in Pisces, and to allegorize that the earth teems with corn and fruits.

The sun generally enters Pisces about the period of February; for instance, in 1824 on the 16th, in 1825 on the 18th of the month. The Romans imagined that the entrance of the sun into Pisces was attended by bad weather, and gales of uncertainty to the mariner (Dr. Forster’s Perenn. Cal.).” (p. 281)

I should mention that the book seems only to have woodcut engravings for a few of the signs of the zodiac, unfortunately:
Aquarius (21st january – 19th February)
Pisces (20th February – 20th March)
Aries (21st March – 20th April)
Virgo (23rd August – 22nd September)

Elsewhere on FromOldBooks.org you can find a complete set of signs of the Zodiac.