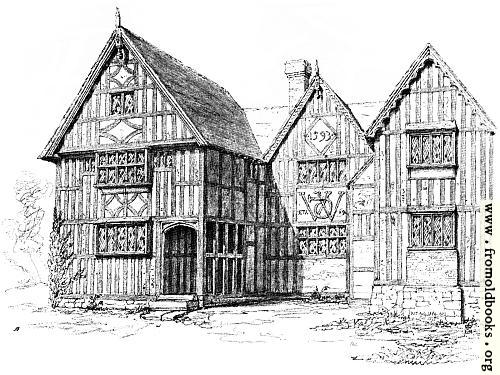 From a drawing by William Twopeny.

The drawing of Pound’s Bridge, near Penshurst (facing page 14), is in itself a valuable document, recording the condition of the house as it was during the first half of the nineteenth century. Some time however between 1847 and 1868 the fabric was sadly altered. The picturesque doorway and porch-passage formed in the open timbering of the left hand wing are now no more; the whole of the ground floor wood-work (with the exception of the window frames) having been swept away for a refacement of plain wall. The house, subsequently turned into an inn, was originally the parsonagee. It bears the date 1593 and the wooden initials W.D. in the centre of the front, showing that it was erected by Rev. William Darknoll, who however, only lived to enjoy it for three years. He died in 1596 and was buried in Penshurst Church, where his memorial slab may still be seen on the north wall of the chancel.” (p. 28)

The reproduction is heavily screened (i.e. made with dots to imitate gray) and I have retained that in this version.