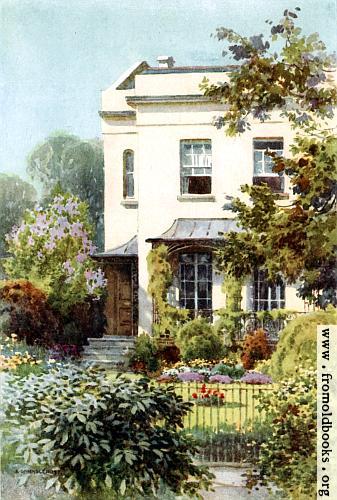 “The way to Nathaniel Hawthorne’s ‘nest of a place’ is up the shady Holly Walk, which leads immediately out of the Royal Parade, [...] by the imposing Renaissance Town Hall and the attractive life-sized statue of Queen Victoria [...]

“[...] a walk so much loved by Hawthorne and by Dickens that the latter lays here the scene of Carker’s first meeting with Edith Granger in Dombey and Son.” (P. 43)

“The place [where he lived when he wrote The Scarlet Letter] will be immediately recognized from Hawthorne’s description of it [in Our Old Home], for the Circus has not in the least changed since the novelist sojourned there, and his two children, Julian and Rose—both, happily, at the time of writing, still living in Ne York—played in the centre garden, where there are trees large enough for a forest.’ (p. 44)