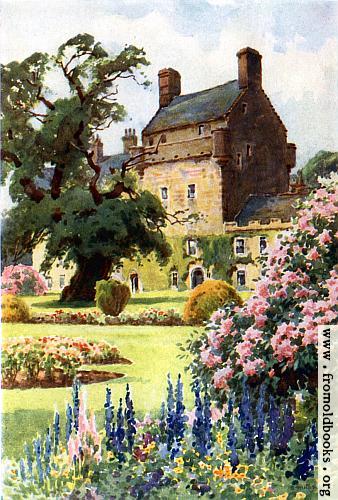 “This Bemerside Hill is a ‘Mount of vision’ from which all the chief shrines and high places of the Scott Country can be surveyed, at least with the mind’s eye. Abbortsford itself, if not in actual view, can be mapped into the scene by direction and position Out of sight, directly under the brow of the hill, is the ancient square fortalice, with later buildings attached, and grounds stretching down towards the Tweed, where Haigs have been resident for seven centuries. They were benefactors of Melrose when Alexander III was king, and when Thomas the Rhymer was their neighbour and wellwisher, and uttered the prophecy that has so mightiliy helped its own fulfilment:

“Betyde, betyde, whate’er betyde,
Haig shall be Haig of Bemersyde.”

Sir Walter Scott was a later friend of the family, and was often a guest in the beautiful rose-garden below the mansion. A grateful nation bestowed the house and manor on the late Field-Marshal Earl Haig, who now lies at rest close by Sir Walter at Dryburgh.” (pp. 32, 33)

Wikipedia page on Thomas the Rhymer