The Antiquities of England and Wales Vol I (page 1/8) 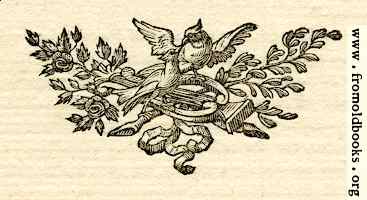 
Two birds touch beaks, perhaps a mother feeding a baby, in this printer’s ornament, used as a tailpiece (tail-piece) at the end of a chapter. The design includes a harp, [...] [more...] [$]


The characteristic marks of this [early Norman] style are these: The walls are very thick, generally without buttresses; the arches, both within and without, as well as those over [...]sic] by very solid, or rather clumsy columns, with a kind of regular base and capital: in short, plainness and solidity constitute the striking features of this method of building. nevertheless, the architects of those days sometimes deviated from this rule: their capitals were adorned with carvings of foliage, and even animals’ and their massive columns decorated with small half columns united to them, and their surfaces ornamented with spirals, squares, lozenge network and other figures, either engraved, or in relievo: various instances of these may be seen in the cathedral of , particularly the undercroft, the monastaty at or Holy Island, the cathedral at , and the ruined choir at in Suffolk. (p. 112) [more...] [$]


The caption reads, History Preserving the Monuments of Antiquity. The side View of Lindisfarne, or Holy Island Monastery, Northumberland. Pub. 25 May 1781 by S. Hooper The image is signed, S. Spurrow sc. [more...] [$] 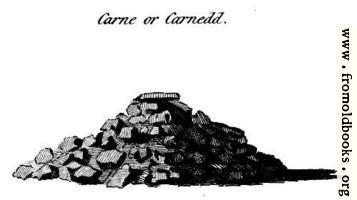 Carne or Carnedd, from the Druidical Antiquities plate 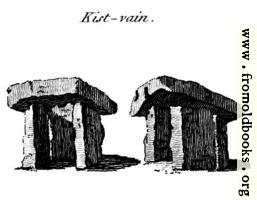 Kist-vain, from the Druidical Antiquities plate

Francis Grose, Esq., FAS., The Antiquities of England and Wales, Being a Collection of Views of the Most remarkable Ruins and antient Buildings, Accurately drawn on the spot. To each view is added An Historical Accounf of its Situation, when and by whom built, with every interesting Circumstance relating thereto. Collected from the best authorities.
London, Printed by C. Clarke, for S. Hooper, No. 212 High Holborn, opposite Southampton Street, Bloomsbury Square, M.DCC.LXXXIII [1783]

My copy of Volume I is falling apart, but that at least means I don’t have to worry about damaging the binding when I scan the pictures. I took a photograph of this book open to the title page.

I wish I had more volumes of this series. I also obtained volume 3, but it came without the maps, unfortunately. The perils of eBay!

The maps in this series of books were originally engraved in about 1694 for John Seller’s Anglia Contracta. John Seller was a noted map maker and publisher of the second half of the 17th century, known especially for his sea charts. Years later Francis Grose got hold of the engraved plates for the maps and used them in this popular series of Antiquities, removing the John Seller cartouche. The colour in the maps would have been added by hand after printing.

There is a short biography of Francis Grose from 1814.

Captain Francis Grose is also known for compiling dictionaries. I have a copy of his Provincial Glossary. He also wrote a dictionary of slang; Project Gutenberg has made a text version of an 1811 version of this (I have a fac simile edition) and I have used this as a starting point, corrected many errors, and put it online as the 1811 Dictionary of the Vulgar Tongue.

There is also an entry in the Nuttall Encyclopædia for Captain Francis Grose.