Revelation 13, The Number of the Beastdetails 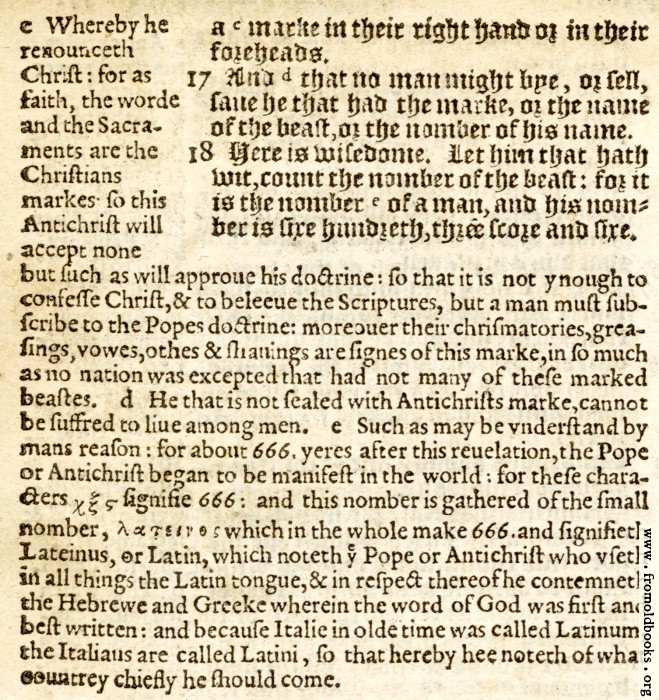 Revelation 13, The Number of the Beast more

Revelation 13, The Number of the Beast

This image shows the text (at upper right) of the Book of Revelation of John the Divine, Revelation Chapter 13 verses 17 and 18 (and a fragment of verse 16) ( Rev. 13 xvii), together with margin notes. The Geneva bible from which this was taken was decidely anti-Catholic and pro-Reformation.

[...]a c marke in their right hand or in their foreheads.

17 And d that no man might bye, or sell, save he that had the marke, or the name of the beast, or the nomber of his name.

Here is wisedome. Let him that hath wit, count the nomber of the beast: for it is the nomber e of a man, and his nom­ber is sixe hundreth, three score and sixe.

The margin notes are as follows:

e Whereby he renounceth Christ: for as faith, the worde and the Sacra­ments are the Christians markes so this Antichrist will accept none but such as will approve his doctrine: so that it is not ynough to confesse Christ, & to beleeve the Scriptures, but a man must sub­scribe to the Popes doctrine: moreover their chrismatories, grea­sings, vowes, othes & shamings are signes of this marke, in so much as no nation was excepted that had not many of these marked beastes.

d He that is not sealed with Antichrists marke, cannot be suffred to live among men.

e Such as may be understand by mans reason: for about 666 yeres after this revelation, the Pope or Antichrist began to be manifest in th world: for these chara­cters χ῞ζϛ signifie 666: and this nomber is gathered of the small nomber, λατεις which in the whole make 666 and signifieth Lateinus, or Latin, which noteth [the] Pope or Antichrist who useth in all things the Latin tongue, & in respect thereof he contemneth the Hebrewe and Greeke wherein the word of God was first and best written: and because Italie in olde time was called Latinum, the Italians are called Latini, so that hereby hee noteth of what countrey chiefly he should come.