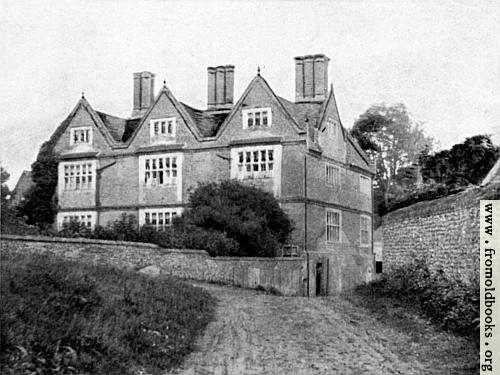 “The village of Sandridge, close by [St. Albans], prides itself upon the honour of being “Mrs. freeman’s” birthplace, regardless of the fact that Burwell Park in Eastern Lincolnshire puts in a similar claim. The actual house in Hertfordshire, according to local traition, is Water End, a late Tudor house of the style rather prevalent in this part of the shire, stone mullions and finely-moulded chimney-stakcs being conspicuous.

Close by theRiver Lea has to be forded, and the proximity of the stream gives the old house particular charm. It has long been used as a farm, as a peep into the spacious court-yard will show.

THis principal E-shaped side faces east, like so many of the mansions of our ancestors, showing that the west wind was not always in favour. The interior of the house, though somewhat rugged and bare, has many points of interest, especially a great oak staircase occupying more than its share of space. One encounteres the usual blocked-up doorways and mullioned windows revealing the greater comforts required by the more humble successors to the Jennings.

Though built by a Jennings, it was not by Sarah’s father, Richard. The association of the ouse with the spirited duchess gives it, of course, additional interest.” (pp. 15,16)

Sarah Jennings (1689 – 1702) was the Countess, or Duchess, of Marlborough; her husband, John Curchill, was the first Duke of Marlborough. Sarah was also a friend of Princess (later Queen) Anne.