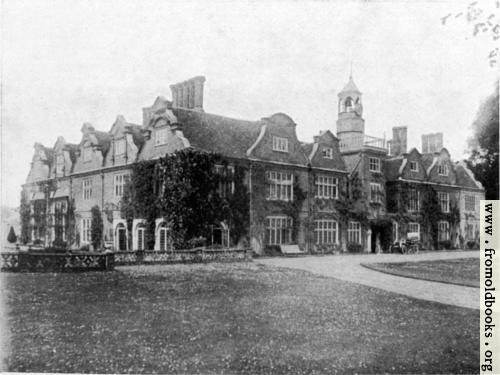 About the same distance from Sandridge to Water End in the opposite direction stands another typical semi-Elizabethan and Jacobean mansion, which, far from degenerating in its old age, has put on a new lease of prosperity, for, as a trasure-house of antique art in the way of carved oak, there are few houses to rival it. And this is little wonder, considering the enthusiasm as a collector of the eminent sculptor (ex-athlete and handomest man of his time), who with polished courtesy and modest pride would conduct fellow enthusiasts round the “linen” panelled rooms, pointing out the peculiarities and beauties of the mediæval and Renaissance workmanship displayed on every side. Here one may study elaborate oak carvings from base to foor: every conceivable form, from the ruggedly chiselled type to the most delicately handled. Nothing is modern. To the most original wainscoted rooms have been added some of the grand old fireplaces from Rawdon House, Hoddesdon (which since its conversion into a nunnery has been shorn of some of its finest fittings, saving the remarkable staircase still in situ). the Rothamstead doll’s-house, as big as a couple of German travelling trunks of the largest dimensions, with which nearly a dozen generations of children have played, like the house in which it stands, has in its several apartments carved oak over-mantels stretching from floor to ceiling with coeval accessories to instruct and doubtles bewilder the successive sprouting branches of the Lawes-Wittewronge tree.” (p. 17)

There is a buggy (a sort of horse-drawn cart) standing by the front door in this old photograph. Rothamstead (now called Rothamsted Manor) has been occupied since the 13th century. Today it is used for agricultural research.