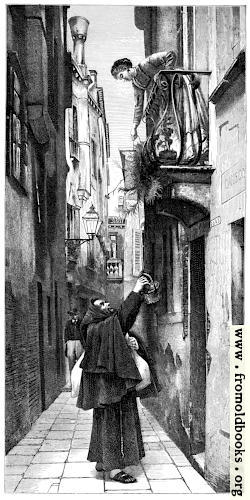 A mendicant friar begging on the streets of Venice. The illustration accompanies an article about Venice. In it, we see a long narrow street, less than six feet wide, paved with flagstones. The buildings are a little run-down, with bricks visible in places beneath the plaster; in the foreground a man stands wearing a monk’s habit and sandals; in his left hand he is holding a bag with another draped over his shoulder and whith his right hand he is taking a small purse from a basket on a string which has been lowered by a lady in a stone-supported balcony above him. He is smiling.

Note: the friar here probably lives through donations and is smiling because of having just received a donation.

The index at the back of the book identifies the artist as L. Passini, which I have taken to be the Austrian painter Ludwig Johann Passini, as the painting is in his style and it’s the right era.