The Sacrifice to the Nile.details 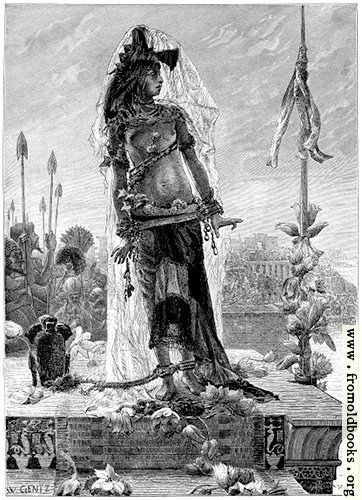 The Sacrifice to the Nile., in Egypt more

The Sacrifice to the Nile.

A young woman, scantily clad except for a long diaphonous wedding veil, stands on a stone platform. She is barefoot, and chained by her ankles to a heavy rock; her hands are tied at her sides. She is to be thrown into the river as a sacrifice.

As soon as the cutting of the dykes takes place, a coarsely moulded figure made of Nile mud is—even to this day—flung into the river with much rejoicing of the people, by whom it is called “the bride”; and it is considered as a substitute for a fair virgin who, it is said, used to be richly dressed as a bride and ast into the stream to purchase its favours. When, after the founding of Fostât, the Nile did not rise to its proper level, Ibn-Ayas relates that the Copts implored the governor Amroo to allow them to offer such a victim to the river. The general refused, but when the Nile remained at its low level and famine seemed to threaten the land, Amroo made the Kalif Omar acquainted with the state of affairs. His messenger came back with a letter and the order to cast it into the Nile. Amroo obeys, and the very next night the Nile reached the required level of sixteen ells; the letter of the Commander of the Faithful contained these words: “To the blessed Nile of Egypt. If up till this time thou hast flowed only by thine own will, then cease to flow; but if thy stream was obedient to the command of the most high God, we beseech that God that he will grant thee thy necessary increase.” This pretty legend is hardly credible, because the ancient Egyptian faith forbids human sacrifice as strictly as the Christian religion itself. However, in pre-Islamite times some kind of offering was no doubt cast into the stream, though not a maiden; and Makreezee tells us, so circumstantially as to exclude all doubt, that in the fourteenth century the Christians were wont to throw a reliquary with the finger of a saint into the Nile to secure a good inundation.

It may be well to mention in this place that the mystery as to the cause of the rising of the Nile has long since been solved. It owes its origin to the rains which fall at that time of the year in the tropics, and to the melting of the snows in the high mountain-rainegs of the cradle of both the primary streams of the Nile. [...] (p. 199)

The image is signed by W. Gentz and (maybe) H Kaefeberg, but I cannot make out the second signature clearly, even with a 1400ppi scan.