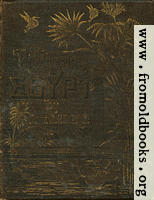 
These are large books, measuring some eleven or twelve inches wide and maybe fifteen high (see Size for metric version), and the covers are decorated with gold and black to show a decorative sunken garden pond [...] [more...] [$] 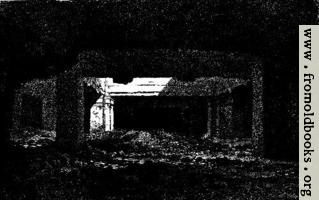 
“By far the most magnificent portion [of Alexandria] was the Bruchium (granery, or height), bathed by the waters of the Great Harbour, and adjoining the oldest part of the city, namely, the original fishing port of Rhacotis. This old quarter was always the residence chiefly of Egytians; and, as in all Egyptian cities, on its western side lay its “City of the Dead.” For, as the sun after its day’s course sinks in the [...] [more...] [$]

Court of an Egyptian House at the Time of the Khalifs 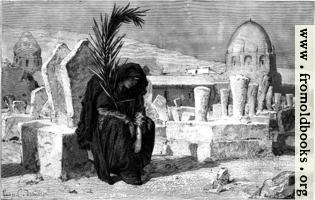 
The book describes a train journey from Cairo to Kafr et Zayat station at Tantah. This illustration appears to depict a woman clad in black and wearing a shawl, citing in amidst the ruins of some ancient city, weeping, presumably for her lost husband. It is not clear whether she is in a graveyard or by a some ancient tomb. The engraving is signed [...] [more...] [$]

The Sacrifice to the Nile.


A young woman, scantily clad except for a long diaphonous wedding veil, stands on a stone platform. She is barefoot, and chained by her ankles to a heavy rock; her hands are tied at her sides. [...] [more...] [$] 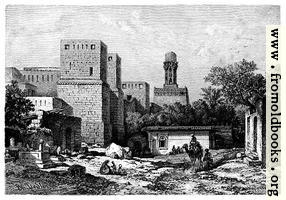 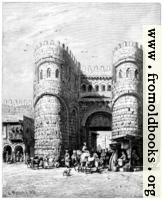 
The modern spelling of this Egyptian fortification is Bab El-Fotouh. You can also find Bab al Futuh or Bab el Fatuh. It is the West Gate of the city of Cairo in Egypt; the name means ‘Gate of Conquests’ and it, along with the East Gate, was built in the late 11th [...] [more...] [$]