Combat of Gladiators with Wild Animalsdetails 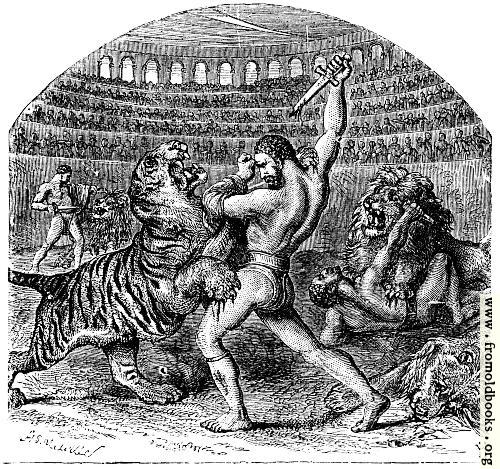 Combat of Gladiators with Wild Animals, in Rome more

Combat of Gladiators with Wild Animals

In the foreground, a Roman gladiator fights with a lion; he is naked from head to foot except for what look like metal underpants and a ring around his left leg, and he brandishes a short sword or dagger. Two other pairs of gladiators fight similar big cats in the background, and in the distance a crowd watches. One of the gladiators in the background (towards the right) appears to have lost the battle. The Romans used condemned criminals and slaves in the arena.

I have also made a detail of this woodcut available showing just the lion and the foremost gladiator. The naked man’s expression is severe, but since it looks like his left thigh was just wounded perhaps it’s no surprise.