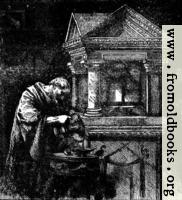 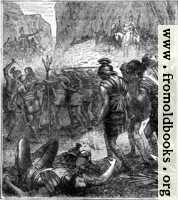 Vanquished Army Passing Under the Yoke


Brewer’s Dictionary of Phrase and Fable says, in the entry for Yoke, “To pass under the yoke. To suffer the disgrace of a vanquished army. The Romans made a yoke of three spears—two upright and one resting on them. When an army was vanquished [i.e. beaten], the soldiers had to lay down their arms [i.e. weapons] and pass under this archway of spears.” [more...] [$] 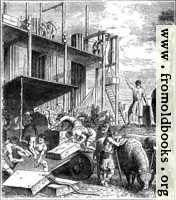 
Slave labour! The men working in this illustration are scantily clad: they wear shorts or loin-cloths, and have bare backs and bare feet. An ox-driver leans with his stick against two oxen; he has a hat and an animul-fur skirt or loin-cloth and a purse. He is barefoot. In the background, a pair of more richly-dressed man gaze on as a craftsman wearing [...] [more...] [$] 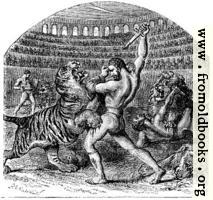 Combat of Gladiators with Wild Animals


In the foreground, a Roman gladiator fights with a lion; he is naked from head to foot except for what look like metal underpants and a ring around his left leg, and he brandishes a short sword or dagger. Two other pairs of gladiators fight similar big cats in the background, and in the distance a crowd watches. One of the gladiators in the background [...] [more...] [$] 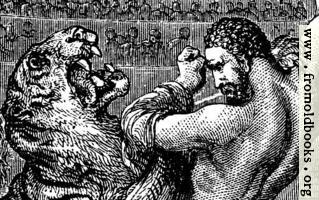 
A detail from Combat of Gladiators with Wild Animals [$] 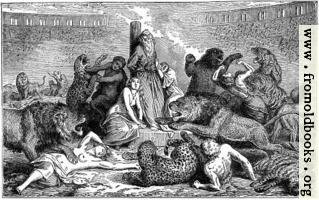 Christians Flung To The Wild Beasts


A scene in the Roman Colosseum, the great theatre where the gladiators fought. But in this case a group of Christians, including men, women and children, has been made available to lions, tigers and bears, [...] [more...] [$]