Vanquished Army Passing Under the Yokedetails 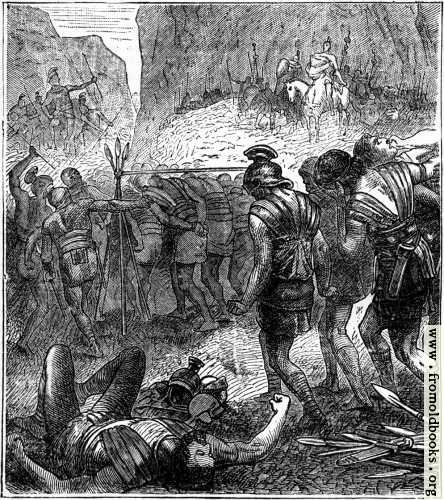 Vanquished Army Passing Under the Yoke

Brewer’s Dictionary of Phrase and Fable says, in the entry for Yoke, “To pass under the yoke. To suffer the disgrace of a vanquished army. The Romans made a yoke of three spears—two upright and one resting on them. When an army was vanquished [i.e. beaten], the soldiers had to lay down their arms [i.e. weapons] and pass under this archway of spears.”

The illustration shows three vertical spears and one horizontal. The conquored soldiers appear to be encouraged to pass under the horizontal spear by a man brandishing a long dagger or possibly a whip. The losers have a cloth wrapped round their waist, but are bare-backed, bare-legged and either barefoot or wearing light shoes or sandals. It might be that they were subsequently taken away and enslaved or killed, or if they were mercenaries I imagine that they might even have been re-hired by the winning army. I didn’t find any description of this image in the book, though.