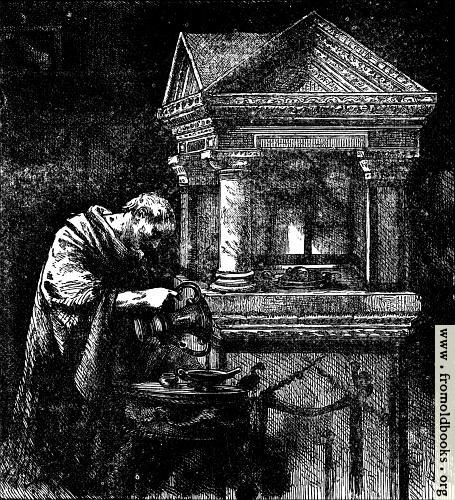 A man, bare-headed and robed, pours from a two-handled jug into a lamp or jug. He is standing by a shrine.

Rome had no sacerdotal caste because the heads of each house were also the priests of the family, celebrating the worship of the Lares and Penates; the chief of each curia, the curio, performed the same rites for it as did the king for the state. Religion, also, like its ministers, was always united with politics. The Vestal Virgins alone were devoted to the altar, to guard the sacred fire of Vesta; the seven other sacred colleges were eminently political.” (p. 30)

It should be mentioned that this extract and illustration are from the chapter of the book on the “legendary history, 753 – 510 B.C.” of Rome.