A sign saying “to be sold at auction” as if written on a heavy curtain rod, complete with pineapple finials, and with heavy fringed clothe hung over it. This woodcut or engraving might have been used as a heading over an advertisement. [more...] [$]


The phrase “to be sold” written in ornate yet heavy, “fat” lettering. The original is not rectangular in the fac simile I have, but whether this is a flaw in the facsimile or [...] [more...] [$] 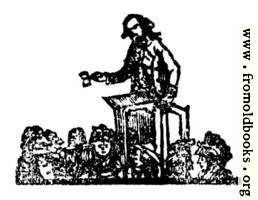 
A bearded man stands at an auctioneer’s bench, holding a gavel, with other people milling about beneath him. [$] 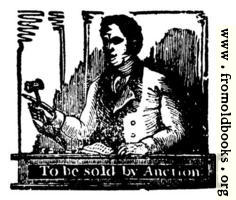 
A man, the auctioneer, smartly dressed with jacket and cravat, sits at an auctioneer’s bench with a gavel held up in one hand. Underneath him the legend, “To be sold by Auction.” [more...] [$] 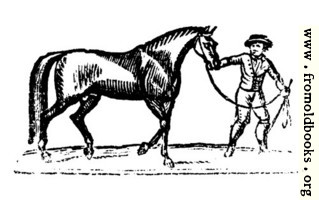 
A man wearing jodhpurs, tall boots and a hat leads an unsaddled horse in a circle; he carries a whip. [$]


Two badly-drawn horses are neck-and-neck at the finish line in a horse-race, their jockeys brandishing whips. [$] 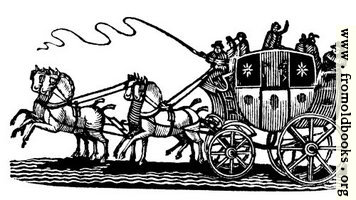 
At one time people had different names for different sorts of carriage. This one is like a stage coach. It is enclosed, with a door, and windows either side of the door each bearing a star, and also with seats up on the outside. There are five people seated outside as well as the [...] [more...] [$] 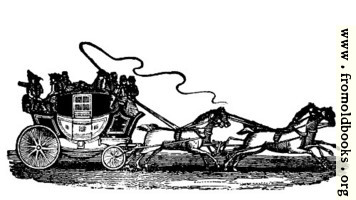 
This woodcut is similar to Fig. 159, except that the carriage and horses are moving to the right, the wheels are smaller, and the spokes are drawn to give an effect of rapid motion. [more...] [$]


Two (or maybe four?) horses are pulling this coach; the driver weilds a long horse-whip. [$] 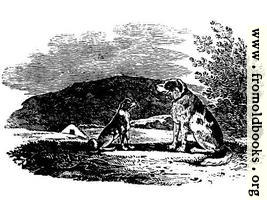 
Two dogs in the Scottish highlands, with a crofter’s cottage in the background. The dogs are border collies, I think: sheepdogs. [$] 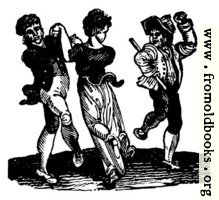 
Woodcut showing three people dancing; they wear eighteenth century clothing. At first I thght they were children playing, but now I think it is a formal dance featturing two men and a woman. [more...] [$]