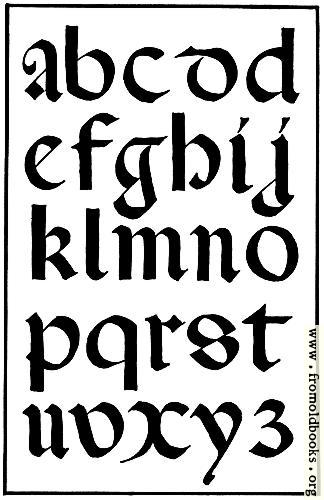 The three pages of examples, Figures 141, 142 and 143, exhibit the characteristic forms and standard variations of the Round Gothic. In lieu of any detailed analysis of these letter shapes, it may perhaps be sufficient to say that they were wholly and exactly determined by the position of the quill, which was held rigidly upright, after the fashion already described in speaking of Roman lettering; and that the letters were always formed with a round swinging motion of hand and arm, as their forms and accented lines clearly evidence; for the medieval scribes used the Round Gothic as an easy and legible handwritten form, and linked many of the letters.” (p. 131)

I have included a higher resolution version than usual, e.g. for making into a font.