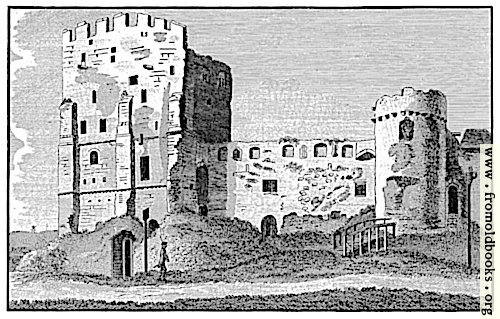 Boswell, Henry: “The Antiquities of England and Wales” (1786)

DESCRIPTION of PORTCHESTER-CASTLE, in Hampshire.

This Castle which is about five miles from Portsmouth, takes its appellation from a village so called in which it is situate, formerly a confiderable town called Caer-Peris.

According to Stowe, it was built 375 years before Christ; but this is not to be vouched for:—In effect, it is of such antiquity that the time when it was erected is not to be traced with any degree of certainty in the records of history.

This is a square building, whose area contains above four acres of land. The walls are six feet in thickness, and about fifteen feet high: it has eighteen towers, and is surrounded on the north, west, and south fides by a deep ditch. Vespasian is said to have landed in the neighbourhood, where there once was a famous harbour: but the sea retiring from it, the inhabitants of the place removed to Portsey. The entrance is on the west side under a square tower

What is called the Keep has four towers three, of which stand on the outside wall; it contains many rooms, and one of them seems formerly to have been a chapel. The parish-church of Portchester, called St Mary’s, stands on the south-east where king Henry I. founded a priory of Augustine Canons. The living of Portchester at present is a vicarage, and the king is the patron of it. Dugdale and Speed, those great antiquarians, take notice of the priory and its removal to Southwark, where it continued till the disfolution of monasteries. This church appears to be a striking pile of old Saxon building; which was last repaired by queen Anne. It has a curious front, for which it is remarkable, as well as for the monument of Sir Thomas Cornwallis, groom porter to queen Elizabeth. The Castle at present belongs to Sir Thomas Thisllethwaite, but was formerly rented by government for the custody of foreign prisoners, whose brcaches made in their various attempts to escape, have much contributed to the injury of this building, which is yet one of the valuable remains of antiquity. (p. 115)