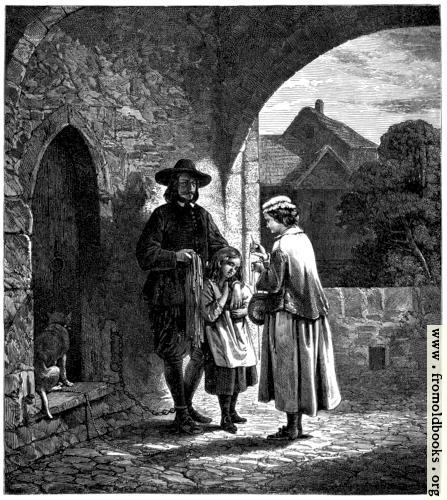 John Bunyan was born at Elstow, near Bedford, in 1628. His parents were poor, and he received the merest rudiments of education. As a youth he became notorious for his profanity, but his vigorous nature underwent a great change, and after a severe mental struggle which he has described, he became connected with the Baptist Church at Bedford in his twenty-fifth year. The great natural talents of “the tinker preacher” were in great request in the neighbourhood during the Commonwealth, and only five months after the Restoration he was arrested just as he was about to commence a service at a small hamlet in Bedfordshire and was committed to Bedford gaol; being one of the earliest who thus suffered under the new order of things. He had been warned of the danger, but would take no steps to avoid it; and though friends offered to become bail he would not suffer them when he found that the bail would be estreated if he presumed again to preach. After the usual examination before the magistrates at Quarter Sessions, Bunyan was remitted to gaol for three months, at the expiration of which time he was to promise to desist from preaching and to attend church; but as he could not do this, he remained in prison for twelve years, notwithstanding repeated efforts made by his heroic wife and by numerous friends to procure his release. It is a singular fact that the release was at length obtained, on September 15, 1672, through the intervention of George Whitehead, a member of the Society of Friends.

As Bunyan could not pursue his usual trade of a tinker while in prison, he acquired the art of making staylaces, in order to contribute somewhat to the support of his family; and tradition says that he was accustomed to sell these laces at the gate of the prison, attended by his little blind daughter. Some of the gaolers during his twelve years’ confinement were compassionate enough to allow him occasionally to visit his home, and even to be absent on short preaching excursions in the neighbourhood.

Bunyan’s chief employment, however, was the production of some of the works which have rendered his name for ever famous; chief among which is the First Part of his Pilgrim’s Progress. From the time of the Epistles of St. Paul, some of the noblest and most touching passages of Christian eloquence have been composed within the dungeon, by the faint light that struggled in through the grated window, and often amid sounds and sights of ribaldry and vice. Had it not been for Bunyan’s long imprisonment the world might have lost one of the finest works of imagination which human genius ever created. The First Part of his Pilgrim’s Progress was published in 1678; six years after his release; and in ten years it had gone through twelve editions, or more than one hundred thousand copies. The Second Part was issued in 1684; and the entire work has been translated into more than thirty languages, and has been eulogized by men of most various and even opposite opinions. (p. 286)