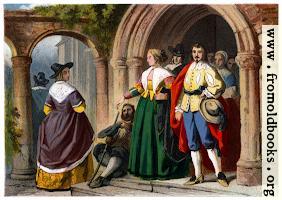 
A colour engraving showing a cluster of people coming out of the door of a church, presumably after a service. They may be the common people but these are not working clothes. [more...] [$] 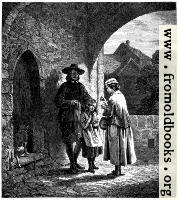 
John Bunyan was born at Elstow, near Bedford, in 1628. His parents were poor, and he received the merest rudiments of education. As a youth he became notorious for his profanity, but his vigorous nature underwent a great change, and after a severe mental struggle which he has described, he became connected with the Baptist Church at Bedford in his [...] [more...] [$] 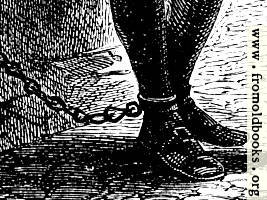 
This detail from John Bunyan at Bedford Gaol shows a manacle or leg-iron around John Bunyan’s black-stocking’d leg fastened to a heavy chain which is set into the wall of the prison. [more...] [$] 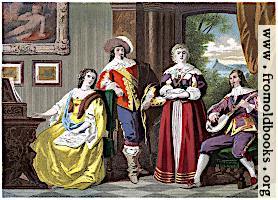 
The coloured engraving shows four adults in a room decorated with pictures in ornate frames and wallpaper; the room has pillars leading to an entrance with a view. [more...] [$] 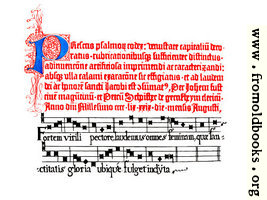 
This wood-engraving shows the two sides of a halfpenny from 1699, in the reign of King William III of England. The coin has the King’s portrait on the front and Britannia seated in her chariot on the obverse. Britannia appears to have generous breasts, bare feet, a frond or feather, a spear, and a shield [...] [more...] [$]


This wood-engraving shows the two sides of a shilling from 1699, in the reign of King William III of England. The coin has the King’s portait in profile on one side and shields on [...] [more...] [$] 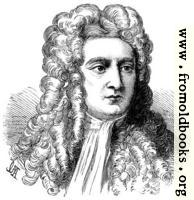 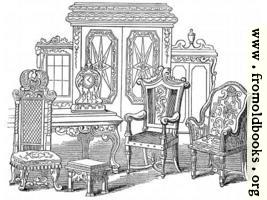 Specimens of Furniture, Time of Anne.


A wood-engraved line drawing of various items of Queen Anne furniture arranged in a group. there are three chairs, a stool, a clock on a table, an armoire or [...] [more...] [$]


An sketch or line-drawing of an ornate clock from the early eighteenth century (C18, 18th C., the Queen Anne period). This is a detail from Specimens of Furniture, Time of Anne. [more...] [$]