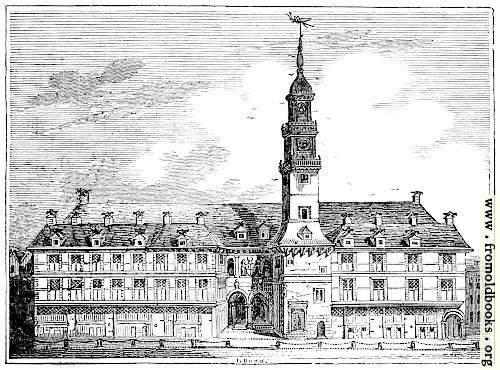 The original building, shown in this engraving, was opened in 1571 but was destroyed in the Fire of London in 1666.

In connection with the monetary transactions of the earlier part of the reign, the name of Sir Thomas Gresham prominently appears. He came of a family of successful merchants, and was often employed in negotiating loans for the royal exchequer with the rich but grasping money – lenders of the Continent; at the same contriving to care for his own interests, and not always being scrupulous in the use of means for the increase of his own wealth. All that is known of him confirms the impression produced by his portrait, viz. that of a shrewd calculating, hard, close man, keen at a bargain, and ever wary for the main chance. His name is chiefly remembered in connexion with his Bourse, or assembling place for merchants; for which he secured the queen’s patronage and the title of “The Royal Exchange” and from which he derived a handsome income in the form of rents (pp. 652 – 653)