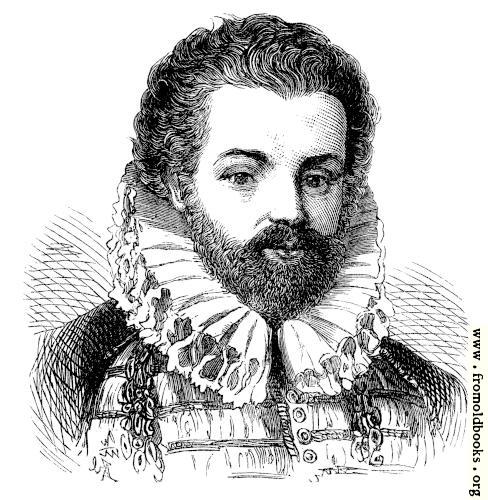 Sir Christopher Hatton is usually represented as the qeen’s lover, and as distinguished through life for his vanity, idleness, dissipation, and hypocrisy, and the best dancer of his age. Perhaps much of the popular odium attaching to Hatton is thte quizzical representation given of him by the poet Gray, in the well-known lines,—

‘Full oft within the spacious walls,

When he had fifty winters o’er him,

The Seal and Maces danc’d before him.

“His bushy beard and shoe-strings green,

Tho’ Pope and Spaniard could not trouble it.”

This poetical skit deals hard measure to Sir Christopher. Elizabeth was too good a judge of character to be imposted upon, and Hatton’s skill in dancing, however great, would not alone have won for him such a high place in the queen’s regard. When Leicester, jealous of the favour shown to Hatton, told her that he would send an Italian who could dance better, she replied.—“Pish! I will not see your man: it is his trade.”

Hatton was botn in the year 1540; and after studying at Oxford and at the Inner Temple he became a Gentleman-Pensioner at court where he soon attracted the royal notice, so much so, indeed, that gossip was busy as to the nature of their friendship. Certainly the queen gave him the affectionate nickname of “Liddes”, and numerous letters in the Record Office show that he addressed her in very amorous terms. For more than a quarter of a century he retained his place in the royal favour, and honours and emoluments were freely bestowed on him; the last and greatest being that being that of the Chancellorship, in 1587, on the decease of Sir Thomas Bromley.

Lloyd, in his “State Worthies” says:—“The chancellorship was above his law, but not his parts, so pregnant and comprehensive that he could command other men’s knowledge to as good purpose as his own. Such his humility, that he did nothing without two lawyers; such his ability, that the queen did nothing without him. …… Seldom were his orders reversed in Chancery, and seldom his advice opposed in Council. So just he was that his sentence was law with the subject; so wise that his opinion was oracle with the sovereign. (p. 651)

More about of Sir Christopher Hatton