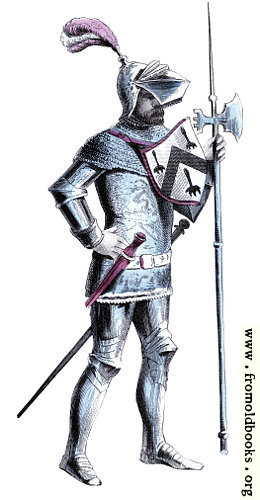 A soldier from “Three knights from the 15th century” without the background or border.

This man holds a pike, or a cross between an axe and a spear. He also has a longsword at his right hip and a dagger or shotsword at his right. He wears chain-mail, and carries a shield with heraldic markings to identify him (or the knight for whom he fights). His helmet is tufted with a plume of pink and white feathers and he has one hand on his hip. They let gay men into the army in 1450, it seems.

See also the pink and yellow bowman and the brown infantryman.