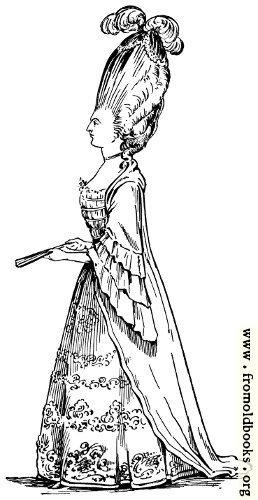 Some dandies who had visited Italy formed in London, about 1770, an association under the title of the Macaroni Club. On their dinner-table was always placed a dish of macaroni, an article of food little known in England at that period. The members were not content with merely enjoying their novel fare, they aspired to be leaders of fashion in dress. About 1772, they made quite an impression on society in London by their eccentric costume.

Their singular attire did not remain long, perhaps, five years at the utmost, but so long as it lasted it met with admiration from lovers of display, and not little abuse from those who regarded it as made for something other than show. Women were not slow to follow the fashion of the men, and dressed á la macaroni. We give pictures of a pair of these Macaronis, in all their glory.

The head-dress of the man first attracts our attention. His hair is dressed into a large toupee, it may be designated as an enormous toupee; at the sides are curls, and at the back it is gathered and tied up into a large club, to rest on the back of the neck like a porter’s knob. A little hat was worn, and if the Macaroni wanted to take it off he usually employed a large cane decorated with silk tassels, and he made a point of carrying the stick with him when walking. A white handkerchief, tied in a large bow, was worn round the neck. The shirt front had frills, and these projected from the waistcoat. The waistcoat was short, reaching very little below the waist, and the coat was also short, reaching to the hips and made to fit tight. Round the small turn down collar of the coat was lace or braid, and frog buttons, tassels and embroidery added much to its smart appearance. The breeches fitted tightly, and were made of silk, sometimes spotted and at other times striped, according to the taste of the wearer. At the knees were large bunches of strings. Two watches were worn, one in each of the pockets of the breeches, and to the watches were attached chains with seals. Silk stockings, with small shoes having little diamond buckles, completed the dress of the dandy as presented to us by Fairholt and other authorities in costume.

The lady Macaroni was in style after the manner of the man. Her hair was dressed so as to form a large heap on the top of the head, and plumes of feathers and bunches of flowers, by no means small, were worn on top of the hair. It is not surprising to learn that the head appeared to over balance the lady. (pp. 175 – 177)

Macaroni in Brewer’s Dictionary of Phrase and Fable.