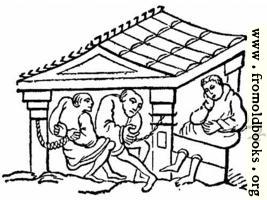 Stocks were used, at an early period, as a means of punishing breakers of the law. The precise date when they were first emplyed in this country is not known, but we may infer from early mediaeval illustrations that the stocks were in general use amongst the Anglo-Saxons, for they often figure in drawings of their public places. The picture we give here is from the Harleian MSS., No. 65. The stocks were usually placed bu the side of the public road, at the entrance of a town. It will be observed that the two offenders are fastened to the columns of a public building by means of a rope or chain. It has been suggested that it is a court-house.” (p. 173)

The man in the stocks has bare feet and legs; probably the two chained men do too, but it’s hard to tell. The prisoner in the stocks appears to be trying to sleep sitting up, resting his head on his hand. Each of the other two men has his wrists held together by a chain which is fastened to a pillar supporting the tiled roof of the building.