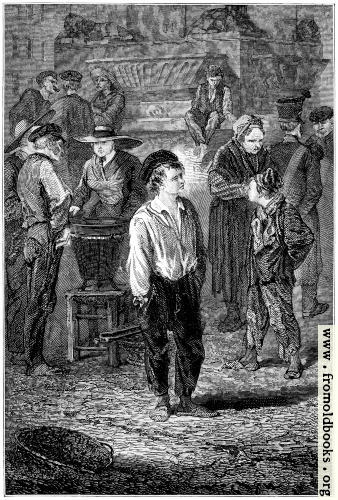 The boy “Gavroche” from the book Les Misérables. A hundred years later the book was made into a musical that was very successful, of coure, and later a film, but at this time it was a book.

Gavroche wears a French cap or beret, a plain linen shirt, baggy pants and slippers; he stands perhaps by a street vendor with probably a charcoal brazier. There’s another boy behind him, and a gendarme or policeman talking to a bearded man smoking a pipe; a barefoot youth of boy sits on a ledge in the background.

Gaveroche was a “tough” kid who was brave but like most children thought himself invincible.