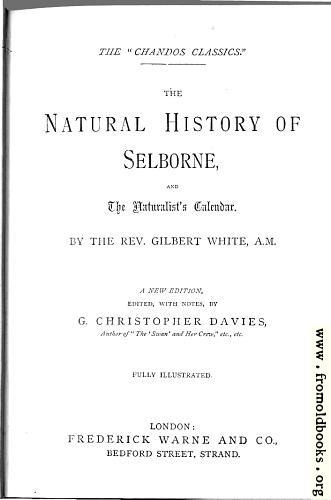 The title page of the 1879 edition is as follows:

The Natural History of Selborne, and The Naturalist’s Calendar.

By the Rev. Filbert White, A.M.

A new edition, edited with notes, by G. Christopher Davies, Author of “The ‘Swan’ and Her Crew,” etc. etc.

The edition I have is the “Chandos Classics” No. 73 from 1879, described in a bookseller’s catalogue like this:

[...] The first Warne edition, published in their ‘Chandos Classics’ series, and arguably the best of the late-nineteenth century illustrated ‘Selbornes’. Davies keeps footnotes to a minimum and White’s text is complemented delightfully by 88 charming illustrations from Whimper and many others. The ‘Chandos Classics’ comprises a series of standard works in poetry, biography, history, drama and so on.

The Natural History of Selborne is a series of letters from White to his friends Thomas Pennant and Daines Barrington, in which he makes observations on the natural world around the parish of Selborne. (Selborne is located in the eastern corner of Hampshire, bordering on Sussex, about 50 miles SW of London.) White takes an interest in everything, including trees, soil types, weather, birds and animals, etc. Contains numerous very attractive woodcut illustrations of various creatures – many varieties of birds, but also fish, insects, and small animals such as otters and hedgehogs. The second part of the book is titled The Antiquities of Selborne, a 90-page section describing Selborne’s church and priory and their history. Part 3 is titled Observations on Various Parts of Nature, From Mr. White’s Mss., With Remarks by Mr. Markwick; this section includes Observations on Birds, Quadrupeds, Insects and Vermes, and Vegetables, plus Meteorological Observations, followed by a summary of the weather between 1768 – 1792. Next is A Comparative View of the Naturalist’s Calendar, as Kept at Selborne, in Hampshire, by the Late Rev. Gilbert White, M.A., and at Catsfield, Near Battle, in Sussex, by William Markwick, Esq., F.L.S., From the year 1768 to the year 1793; this section lists the date of flowering of various plants (i.e., primroses flowered first on Jan. 6), seasonal appearance and activity of birds & insects (bees appeared Jan. 6, green woodpecker made a loud cry Feb.13, frogs spawned Feb. 28, etc.). Last in volume are 4 poems on Selborne selected from the Mss. of the Rev. Gilbert White; followed by an index.

The poems are The Invitation to Selborne, Selborne Hanger, On the Rainbow and A Harvest Scene.

I am reproducing the images, but not yet the text.

The title page says it was edited by G. Christopher Davies, The illustration of the Peregrine Falcon has an ornate GW, but I do not take that to be Gilbert White. The cricket is signed by Whimper, a name that appears on a lot of engravings I’ve scanned. The Gypsies (I should scan that one!) are signed by Dalziel, a London firm of engravers run by a group of brothers starting in the early 1840s. So I’d say that the publisher used engravings that were on hand, rather than commissioning them.
Liam