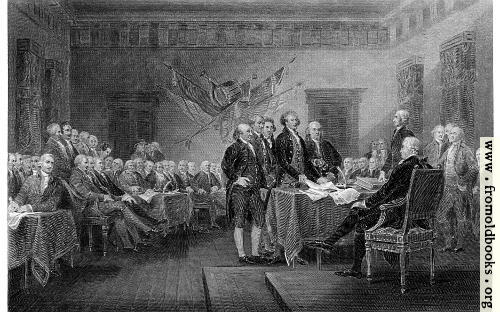 This, it turns out, is a very famous painting in America. There is also a cropped version for use as a laptop of desktop computer background.

Trumbell’s The Declaration of Independence

On the 4th of July, the Congress at Philadelphia agreed on a Declaration of Independence, thereby abdolving the colonies from every allegience to the crown of England. The motion for this purpose first made on the 7th of June by Richard Henry Lee, of Virginia, and seconded by John Adams, of Massachusetts, in conformity with the particular instruction of their constituents and the general voice of all the States, was decided by an almost unanimous vote.—American History.