The stairs leading to a Prambanam temple.


“We drove on, perhaps a mile farther, and came to a wonderful group of temples, dating about the same period, known as Prambanam, where we saw what excited our wonder and admiration. Though the ruins did not contain a sing;e genuine Buddha figure, holdign only many images of Hindu gods, archæologists find ample proof that they were built by [...] [more...] [$]


Another photograph of the temple; this one was badly printed, with a low dot-screen, unfortunately. [$] 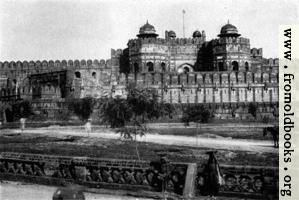 
While the centre of attraction in Agra is the Taj Mahal, the fort, palace, and Moti Musjid (Pearl Mosque) are of equal interest. here we see the impress of three rulers, Akbar (the grandson of the noted Mogul king, Baber, and son of Humauyn, both of whom lived at [...] [more...] [$] 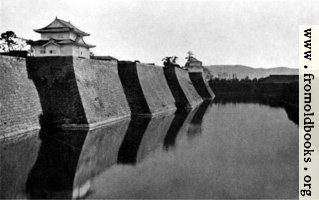 The fort and castle at Osaka


Osaka, April 13th: The next morning dawned brightly, and we left in jinrikishas for a general tour, first visiting the fort where stands a noted castle, very picturesque in appearance. We hen visited the Exposition of Industrial Arts, which did not seem unlike an exposition at home in its general arrangements. The goods displayed, however, were very different. Then [...] of the place, canals being a dominant char­acteristic of the landscape. We saw a particu­larly fine temple among many others. Osaka is a commercial city of great wealth and is more celebrated from a business point of view than from its artistic aspect. (p. 233) [more...] [$]


The front cover of the book is green and gold. The countries listed are Egypt, India, Burma, Ceylon, Java, Siam, China, Manchuria and Korea. [$]

Images from Travels In The Far East by Ellen M.H.Peck (Mrs. James Sidney Peck), 1909. The book records a nine-month journey made by the author. There is a Project Gutenberg edition of this book, here, and it does include the images, although in very small sizes.