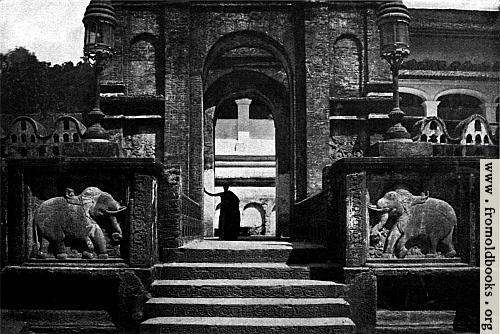 The Temple of the Tooth Relic has its own web site, www.sridaladamaligawa.lk. It has a photograph of the same temple entrance on the page about the temple history.

“Kandy, in the Eastern world, derives its greatest renown from being the home of Buddha’s tooth, and the temple of the Tooth attracts great crowds of pilgrims of the Buddhist faith from many lands. It [the tooth] is said to have been brought here in the sixteenth century, and the small temple in which it was placed has been enlarged and made a shrine where costly gifts are laid by devotees from China, Japan, the Malay Peninsula, Siam, and other remote points. Buddhism claims the larger portion of Ceylon’s [Sri Lanka’s] subject’s, having in comparison with Hinduism a small following in India, where it originated.

“The tooth is said to be the left eye-tooth of Prince Siddhartha, taken from his ashes twenty-five centuries ago [as of 1909], but it is believed that the original tooth was burned by the Catholic Archbishop of Goa, Portugal, in 1650, and a spurious one substituted. However, it is worshipped as the real one, and the morning following our arrival, we attended the 9.30 service at the temple, where a crowd was in attendance, seemingly enjoying the hideous music of the tom-toms and instruments of a similar Oriental character. The tooth is not shown except on rare occasions, but through a glass door we saw its jewelled casket and the table on which it rests.

“There were many offerings before this relic and before the other images of Buddha which are to be found presiding over all temples. Much superstition was evident, but the sacrifices and practices that are to be seen in the Hindu temples are here wanting. It is a sad reflection, however, that Buddha’s noble teachings could not have borne better fruit.

“The library of the temple held many richly bound Buddhist books, written on leaves made from the talipot palm. The leaves bound together are long and narrow, and are hels in place between heavy covers. The priests, as in Burma, wear a yellow silk robe draped like a Roman toga. They are seen everywhere, going about in the early morning with a begging bowl; they are ever courteous and apparently well bred. Cremation is practised, as with the Hindus, but the rites preceding it are far more imposing and cover days of peculiar ceremonies, while the Hindus practise almost immediate cremation.” (pp. 130, 131)