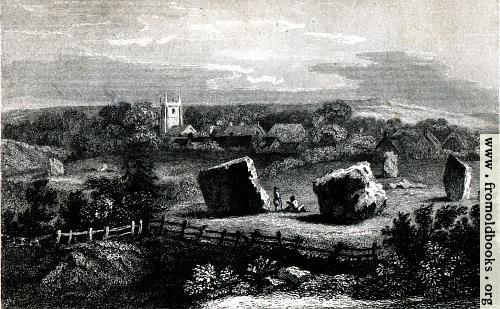 This engraving accompanied the December 1830 issue of the Youth’s Instructor and Guardian, the article being entitled Druidical Temple, Avebury (With an Engraving).

This once magnificent temple is situated about five miles west from Marlborough, in Wiltshire, and in the vicinity of the remains of Stonehenge. Its ruins are the most gigantic and interesting of all our ancient British monuments; and in its pristine state it was of the same cless or magnitude as Stonehenge, Stanton-Drew, the Hurlers, Long Meg and her Daughters, and various other monuments in Cornwall, Scotland, Ireland, Wales and Britany; but it surpassed all these in the number and size of its upright stones, its vallum and fosse, and its appendages.” (p. 397)