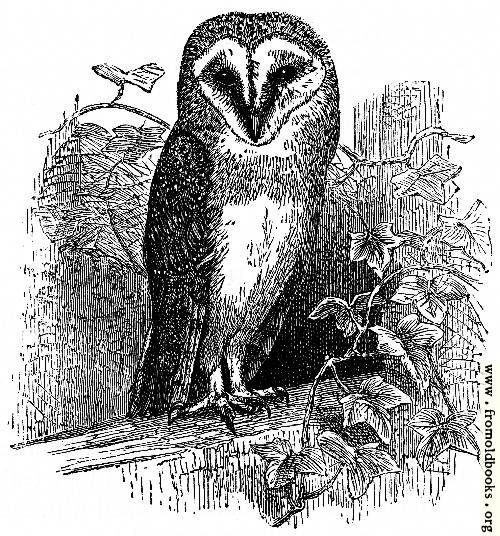 The barn owl, or white owl.

We have had, ever since I can remember, a pair of white owls that constantly breed under the eaves of this church. As I have paid good attention to the manner of life of these birds during their season of breeding, which lasts the summer through, the following remarks may not perhaps be unacceptable:—About an hour before sunset (for then the mice begin to run) they sally forth in quest of prey, and hunt all round the hedges of meadows and small enclosures for them, which seem to be their only food. In this irregular country we can stand on an eminence and see them beat the fields over like a setting-dog, and often drop down in the grass or corn. I have minuted these birds with my watch for an hour together, and have found that they return to their nest, the one or the other of them, about once in five minutes; reflecting at the same time on the adroitness that every animal is possessed of as far as regards the well-being of itself and offspring. But a piece of address, which they show when they return loaded, should not, I think, be passed over in silence.— As they take their prey with their claws, so they carry it in their claws to their nest; but, as the feet are necessary in their ascent under the tiles, they constantly perch first on the roof of the chancel, and shift the mouse from their claws to their bill, that the feet may be at liberty to take hold of the plate on the wall as they are rising under the eaves.” (p. 164)