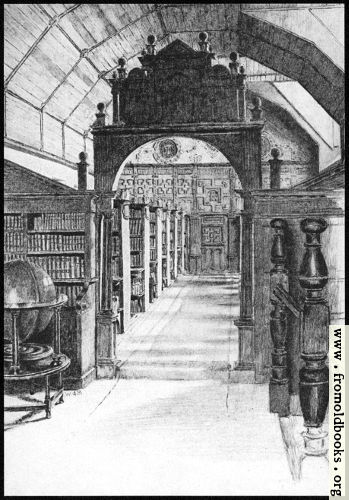 Merton is the oldest college in Oxford, founded in the 1270s, almost 750 years ago. This sketch gives us a glimpse inside the ancient library with its rows of books so inviting.

Merton, as has been said, is the “type” college, if one may thus apply a scientific term;hence it is fitting that it belong to the two men to whom perhaps Oxford owes most. Thomas Bodley was a fellow and lecturer in Greek there, before he left Oxford for diplomacy, and accumulated that wealth which he used to endow the oldest and the most fascinating, if not the largest, of British Libraries. And among the men who have gained from “the rare books in the public library,” a way to a “perfect elysium,” none better deserves remembrance than the Mertonian, Anthony Wood, whose monument stands in Merton Chapel, but who has raised monumentum aere perennius to himself, in his History of the University of oxford and his Athenæ Oxienses. (p. 35)